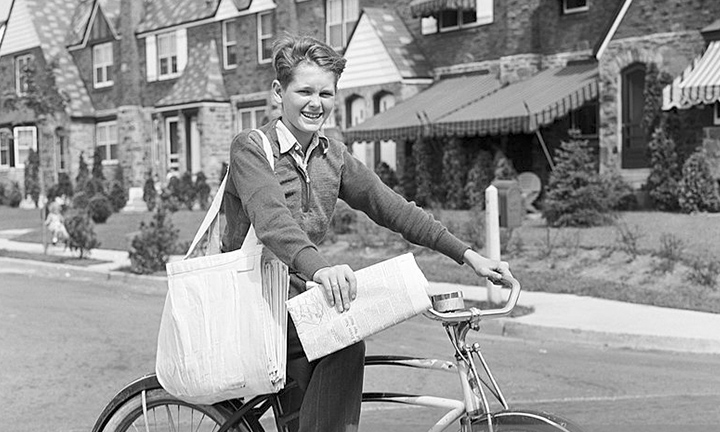 With deep gratitude I thank you Russ Stover, for trusting me to deliver 135 Seattle Post Intelligence newspapers in my beloved Anacortes, Washington. I was 11 years old.

The  life lessons were huge. The job began with some difficulty. My predecessor had cheated Mr. Stover by pocketing money. Russ asked me to collect payment as well, but he didn’t know who had or had not payed for the previous month.

Gingerly I knocked on door after door to collect. Initially it was going smoothly.

Some said, “Well son, we already paid for last month.” Others gladly shelled out the buck-85.

Yet, there is a villain in every story. There was a row of shacks, straddling a drain runoff to the sea. It was scary, even in daylight for a child.

Knocking at the door with great fear, an old man opened the door. “May I collect for the paper?” I asked.

Immediately I was running up the gravel road running for my life as a yelling angry man was chasing me with a cane in his hand. To make it even scarier, he was shouting at me in a foreign language. Thankfully I could out run him.

Mr. Stover made peace for me with that man. I began to faithfully deliver his paper. Each month he gave me a small tip. Some days in the wee hours of the morning he even asked if I wanted water.

One day, the man, once tall and powerful asked, “Would you put my paper inside my house?” It was no bigger than a backyard shed.

Though fearful this began a daily ritual. An almond bar became a weekly gift for my extra trouble. Overtime, as I look back – we became dear friends. His paper boy may have been the only daily human contact he had.

After two years of faithful service Mr. Stover offered me a career advancement. The number one paper route. Bigger homes, the best in the town, more customers, and best of all, yes, filthy lucre. Money drives the bus.

Yes, was my immediate response. Thinking of the enormous tips and gifts at Christmas. My old town route produced amazing tips, thank you’s and immediate monthly payments. 35 dollars was my joyful bounty at St. Nick time.

Surprisingly collections were much more difficult on the new route. Since the Crowell’s lived in a borrowed house, we assumed folks in big houses were rich. Vividly my memory banks recall this scene.

Five or six adults having drinks in comfortable chairs. Lady asks, “May I help you?”

“Collecting for the paper,” I say. She looks back to the owner sitting in chair with glass in hand.

He yells, “Tell him to come back I don’t have any money right now!” Boom. How can you live in a big, fancy house and not have a buck-85?

Christmas was a filthy lucre disaster. Few gifts, $15 not $35 in cash was my reality even though many customers demanded me to put the paper inside the screen door. A costly time eater for a right handed flame thrower on the pitchers mound who could lay a rubber band wrapped paper from sidewalk to perfection at 30 plus feet.

Russ Stover was my boss for nearly five years. I retired at age 15. No longer could I wake at 3:30 or 4 each a.m.  Basketball was my dream.  Giving up my only source of income was one of life’s worst feelings, no money, not a single dime. My dream was only possible because a college basketball scholarship, which was my ticket to freedom.

Mr. Stover, I thank you for giving me the privilege to work for you. You believed in me when I had no reason to believe in myself.

Paper boys of old learned the truth about people. These lessons shared here are the foundations NBC Camps are built on.

Honor all people; especially the paper boy, the busser, the garbage man, the maid. These are often the best people on earth.