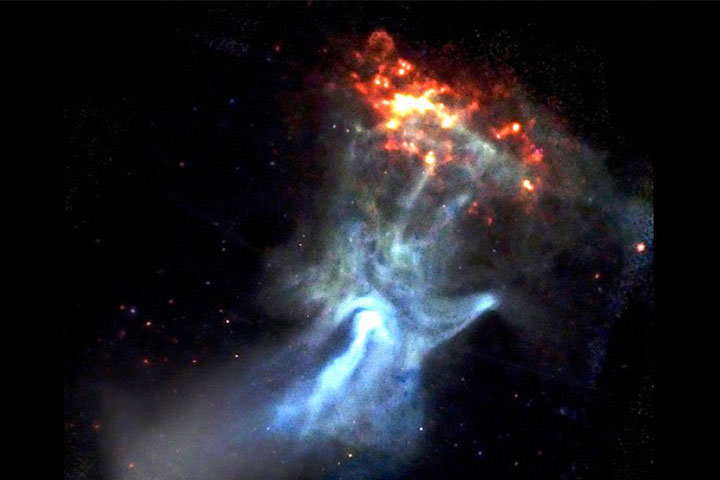 Words of Hope: The Magnificent One

There is a Webb Space photograph that has captured my imagination. It appears to be a huge hand lifted like an artist moving the stars into place. The mentor for C.S. Lewis explained that the glimpse of the sheer magnitude and awesomeness of God causes creature dread. There is only awe and reverence for what Teresa of Avila calls the Magnificent One. In ancient Israel, thousands prostrated themselves in reverence and homage to God. His name so holy as to be unutterable.

I ponder the notion of Dad with God having passed out of physical time and bodily presence in this temporal world. These considerations are too lofty for me. Instead, I imagine Dad lying on the couch while I decorate for Christmas. He might doze off, or we might have a little chat. I could say, “Dad, I need you to do this,” and I know he would try and move heaven and earth for me.

A woman who coached at NBC years ago came by my office. She told me, “You know your dad totally loved you and always spoke with such gratitude for you.”  I thank God for the gift of a loving dad every day. What brings me joy is that this loving father radiated not out of himself but out of his love and devotion to the Almighty Father God. I think of Jesus describing a father running to his prodigal, errant son who wished him dead so he could have his wealth. He wanted to reshape how the world viewed things.

Life without God lacks fulfillment. Money, parties, and fame are like the emptiness of corn husks. The Magnificent One, the God who sets the stars in place, He calls them all by name. This is what scripture says about love. God is love.

What thought is more worthy to ponder? It makes me bow in reverence and awe and say, “Holy, Holy, Holy is the Lord God Almighty who was and is and is to come.”

“He is the radiance of the glory of God and the exact imprint of his nature, and he upholds the universe by the word of his power. After making purification for sins, he sat down at the right hand of the Majesty on high.” – Hebrews 1:3