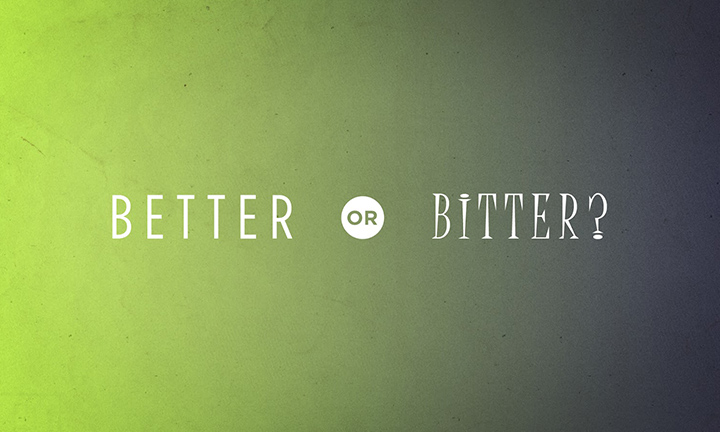 TWO CHOICES – WE GET BITTER OR WE GET BETTER

God’s mercy is for everyone.

“And so dear brothers and sisters, ‘I plead with you to give your bodies to God because of all He has done for you. Let them be a living and holy sacrifice – the kind he will find acceptable” – Apostle Paul (Romans 12:1)

We live in most difficult times.

It was said to me, “Fred, did you know there have been 326 radical Islamic terrorist attacks in the USA in the past three years?”

22 days after my wife, Susie Crowell, was born, Japan bombed Pearl Harbor. She did not see her Dad Walt, for nearly four years. During the war Walt hunkered down in a foxhole for 76 straight days in Asia.

Kathleen Crowell, my guardian angel Mother, suffered for five months of fighting pancreatic cancer. She died August 23, 1963; I was told she weighed 62 pounds at the time.

From 1963 to 1966 Fred Crowell lived in the land of bitter. Hatred toward God enveloped my mind and heart. To exist, all thoughts of my mother were eliminated. I refused to think about her. At her funeral, my priest told me I was going to hell.

Bitterness empowered me to respond to him in defiance of God, “I’d be glad to go to hell as long as you aren’t there.”

St. Paul understood God’s mercy because he was an expert, as I am, in bitterness. On the road to Damascus, Paul had a transforming encounter with Jesus. He was never the same again.

My encounter with the Savior took place in Fairbanks, Alaska. I had not as much as dropped one tear in three years when God’s mercy became my reality, when I discovered the love of God, when it became crystal clear Jesus Christ died on the cross for me.

Today as I write these words, I grieve for all who are suffering. My heart cries for the daily pain I see being inflicted not only by what terrorist are doing, but also what people do to destroy themselves.

The one place I go to find meaning is to the cross where I find God’s mercy. This is the only place I find true hope and hope makes me better.