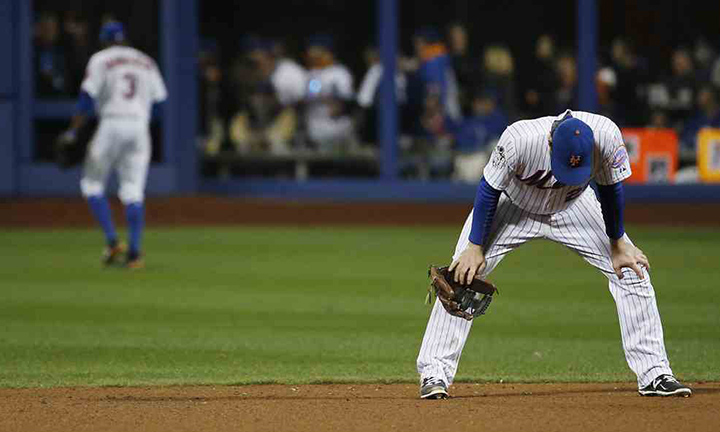 “We should have won that game.” – New York Mets Terry Collins

Matt Harvey took a 2-0 lead into the ninth. Collins was at a crucial decision point; yield to Harvey or bring in his ace reliever. An even tougher call when his star says, “This is my game. Let me finish.”

Like me and many others I know, second guessing becomes an ugly habit if not subdued.

Susie’s dad liked the saying, “If candy and nuts were where shoulds and buts, oh what a great world we would we have.”

The Mets lost the game, leaving Collins in second guessing mode and blaming himself.  Thinking, ”We should have won that game.”

Yet, nothing changes! The Mets still lost the game. Each time I second-guess myself, I feel the defeat of whatever unsuccessful decision that led me there again and again, like Collins. He keeps losing game 5 over and over.

This baseball story captured my attention because one of my goals is to stop second-guessing myself.

There is also a psychological principle, whatever you stop doing creates a void and this void must be filled; though it can be filled with a negative or a positive.

It’s not enough to say, “I’m going to stop second-guessing.” That’s only the first step.

The second step is to have a solution. To come up with a prognosis. We’ve done the diagnosis. Now let’s move forward with a solution.

I learned quickly in the family and personal counseling profession 5 years ago that psychology is a wonderful tool to  diagnose a problem. Psychology can undress you emotionally, but it can’t dress you.

Psychology is not very effective in the prognosis solution arena.

To change to be transformed, I have discovered God’s word provides the prognosis, the prescription, the solution.

If this sounds simplest guess again. Identifying a problem is much easier than finding the solution.

God reserves truth, the solution, only for those who come to him with a sincere heart; Jesus said  it best, “Come to me as a little child.”  If we don’t come as a child running to the trustful arms of a mother or father, His solutions are impossible to discover.

The two ways I find most effective in stopping the destructive act of second-guessing are: in memorizing and repeating these principles.

Brothers and sisters do not consider myself to have taken hold of it but one thing I do: forgetting what is behind and straining toward what is ahead I press on toward the goal to win the prize for which God called me heavenward in Christ Jesus . – Philippians 3:13-14

Do you second guess yourself?

Do you you want to reduce second guessing yourself?

Post it where you read it am and pm.

If you are really serious, commit it to memory.