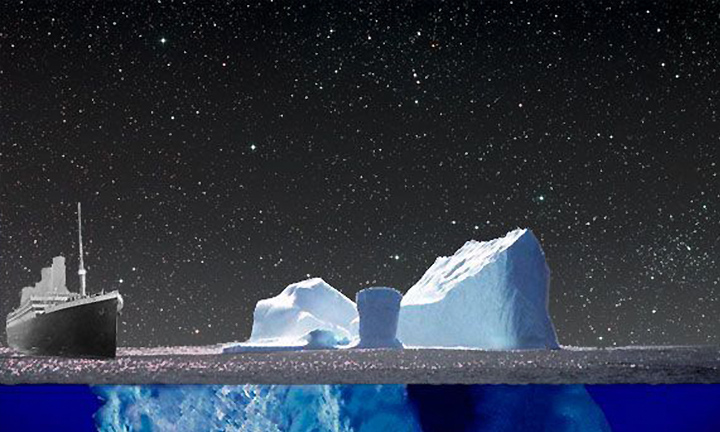 PRINCIPLE OF THE ICEBERG

What you don’t see is far more important than what you do see.

Imagine the excitement 2224 of the richest people in the world and some emigrants hoping for a new life were feeling the day in Southhampton, England when they boarded the majestic unsinkable RMS TITANIC.

Imagine the pride and sense of accomplishment of Captain Edward Smith when he was chosen to make the maiden voyage across the Atlantic on the world’s greatest vessel. 882 feet long and 92 feet wide and able to cruise at 22 knots per hour unbelievable!

The eyes could not absorb or get enough of the majesty of the great ship. Without being there to see it; it was beyond imagination and comprehension.

As the Titanic gracefully reached the North Atlantic a huge iceberg loomed on the horizon. It was a solo iceberg drifting south.

The iceberg did not seem to pose a threat. The eyes of the Captain and his crew could easily see the massive body above the water, but it was the other 66% below the water that was important.

Unfortunately for the Titanic beneath the water, the iceberg had an odd shape, shooting out like a long razor-like knife was a ragged arm extending deep in the water.

This treacherous; jagged arm of the iceberg tore through the great ship like a sharp blade slashing through a sack of grain.

What you don’t see is all too often more important than what you do see!

Too often marriages fail because the relationship was established on a foundation based on physical looks instead of pure character.

Too many coaches choose the player who looks good and bypasses the “kid” with guts, fire in the belly and a never quit attitude.

Valuing what you can see over what you can’t see rewards natural talent over the hard worker. Yet hard work over time beats talent.

The prophet Samuel had it right when he chose David the kid over the bigger and the stronger. Man looks on the outside but God looks on the inside.

True Spokane Story: A Man had about 5 million parked in a local bank. One day he went to the bank to cash a check. He was poorly dressed and disheveled in appearance.

He asked the teller to cash a check. He was denied. He asked to see a manager. He was declined.

The bank soon lost a 5 million dollar account and even more damaging added some bad publicity in the local press.

St Ignatius taught his band of brothers, who for the past 500 years have had a profoundly positive impact upon the world, to see the Incarnation of Christ in everything and everyone, rich or poor.

When we see the golden strand of the Christ in all of creation; a flower, the stars, a sick child, a mother’s face, a man’s weathered strong hands, a baby’s smile, the last days of one ready to be greeted into the arms of the Savior, life becomes altogether a new ball game.

I call it Lifeball. Wanna play?