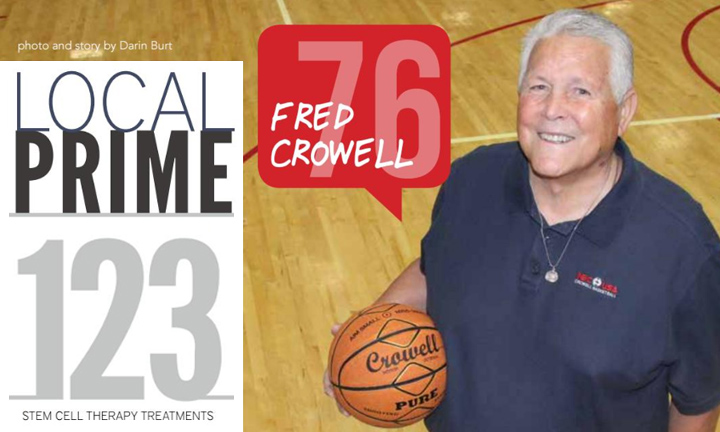 Every winning coach has a game plan and a playbook. Fred Crowell was the head basketball coach at the University of Alaska Fairbanks, then as the first coach for Athletes in Action, a program facing top 20 NCAA teams, like Duke, North Carolina and Kansas State, night after night, and since 1971, as the founder of Northwest Basketball Camp, Fred Crowell has amassed a winning record. Not only against opponents, but in mentoring players to perform to the highest expectations on and as well as off the court.

NBC has become Nothing Beats Commitment Camps, focused on helping campers find the courage to be committed to a life of excellence—a life that isn’t about perfection or external success as much as it is about living life with gratitude, mental toughness, strength of character and the will to overcome any difficulty with dignity and confidence.

Crowell has written a manual on coaching basketball, given motivational talks to teams, and even invented a special ball to help players improve their shot. Building on the fundamentals of ball handling, shooting form and defense, Crowell holds a core belief in strengthening the unique abilities and personal value of the individual, and the need to be practical with God through a life of faith.

“We build on three things: the kids need to be loved, they need to belong and they need to have success,” Crowell says. “In their soul is an amazing spirit of survival that God put in all of us.”

“Basketball has lost the meaning of what Dr. James Naismith started the sport for, which was as a game to build character,” Crowell says.

“With children, whether they want to be an artist or a basketball player,” he says. “Our job is to help them go as far as they can.”

Crowell, who played basketball and baseball at the University of Idaho, where he earned an undergraduate and master’s degree, also ran a personal counseling service early in his career.

He’s still called upon to speak to teens and parents on life altering issues such as bullying and suicide. When a village in Alaska was impacted by youth suicide, rather than a psychologist or psychiatrist, they brought in Coach Crowell, whose message of personal commitment and hope, backed by basketball, is immediately relatable.

“In basketball we take care of the ball because we don’t want turnovers. In life, the most important thing is to guard is the heart—we’ve only got one of those,” Crowell says. “Something we teach 24/7 is to learn from the past and live right here, right now.

“To live well, for me, to seize this very day—the first challenge is to win the moment,” Crowell writes in Words of Hope, his daily blog of inspirational reflections, “At this moment, I choose gratitude, thankfulness, joy, peace, patience and love.”

Crowell, married for 55 years to his bride Suzie, whom he credits for opening his eyes to power and grace of the Lord, practices what preaches. Nine years ago, he was diagnosed with metastatic bone cancer, and doctors gave him three years to live. Standing strong and tall, and shooting the ball well from the outside arch, he’s still eager, willing and to play the game.

“Cancer can take my body but it can’t take my mind,” Crowell says. “I’m living large. God is my coach and I know how to win.”