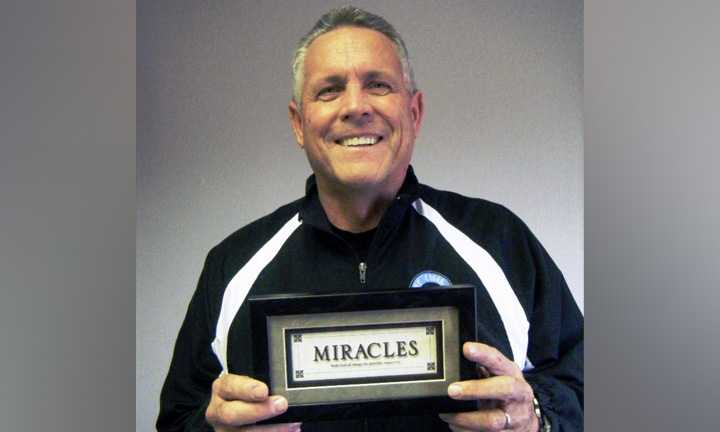 If Impact Matters, then Fred Crowell is a Legend!

I firmly believe that God sends people across your path on a daily basis to impact your journey. Once in a while though, the Good Lord brings someone into your life that simply seem capable of walking on water. I call them zebras, because in Oklahoma you rarely see or come in contact with a zebra. When it comes to zebras, it seems like God took a paint brush and got creative. He splashed a little special on them. Fred Crowell is a zebra if I ever saw one!

As I have grown spiritually in my relationship with Christ and have matured in walking in the power of the Holy Spirit, it is almost as though my spirit or the Holy Spirit in me can sense a zebra the second they walk in the room. Is it their level of joy? Is it their uncommon confidence in who they are in Christ? Is it a fearless nature that oozes from their every step? I believe the answer is “all of the above” and so much more.

The day I met Fred Crowell, my zebra senses meter went off the charts. It was like I was on an extended fast and walked into a bakery. Fred has so much love and such an amazing gift of making you feel special. I am talking about the thousand times more blessed and special that the author of Deuteronomy 1:11

writes about. The impact Fred has had on people and especially young athletes during his lifetime, will continue to change peoples lives for years to come through every single person that he has touched. I hope you enjoy reading this testimonial blog post about the life of someone I consider to be a living legend of impact!

All things work together for good to those who love God ( Romans 8:28

) is true reality for these 77 years of my life! All my life has been filled with choices and often, by God’s grace, bad news becoming good news. Ironically, these choices have occurred in several cities. Let me take you on an historical excursion.

Unfortunately, my home was a dysfunctional system, and my brother and I (ages 4 and 3) remember having our two best Christmas presents, an electric train and a red electric riding jeep repossessed. In fact, we saw them for resale at a hardware store. My dear mom was my lifeline and the image of all that was good. Yet, when she died of pancreatic cancer, I was deeply upset. I exclaimed at age 21 to the priest giving her Rosary who told me I was going to hell: “I’ll be glad to go to hell as long as you are not there!” I hated him, and I hated God. Period.  Baseball and basketball saved me!  My life existed to compete, to win, to earn a college scholarship.  Making the All-State First Team in 1960 was the greatest accomplishment of my young life.

Sports, especially basketball, became my love.  They also became my security blanket. When I held a baseball in my hands on the pitcher’s mound, I was king of my world. When I was dribbling a basketball on the court, I feared no one. Inferiority, poverty, shame, guilt evaporated. All my anger and aggression now were legal…if kept under control. Full-ride athletic scholarship offers were my freedom from poverty. My choice ultimately became the University of Idaho at Moscow, Idaho, after circumstances closed the door to the University of Washington.

Now let me be clear, despite my high hopes, my basketball and baseball careers were abject failures. However, the Crowell boy who thought he was stupid, whose parents quit school at age 14, was mentored for five years by Dr. Leon Green.  On the verge of flunking out, I was in Memorial Coliseum feeling sorry for myself.  “Doc” Green spotted me and placed his right hand on my shoulder.  “Crowell, I see greatness in you; come major in physical education.” This sounded pretty good until I found out he required his P E. majors to have two teaching minors to ensure getting employed.  English and Biology became my new favorite subjects.

In high school, I was too poor and too dedicated to basketball to have a girlfriend.  At age 19, I was introduced to “Susie”. Without question, Susie elevated my life in every way.  I went to Idaho to become a basketball star. I left Idaho with a miracle of a woman, a fantastic education and a head basketball coaching position. Now, fifty-five years later with Jennifer and Jay (our children) and five amazing grandchildren, we are living our dreams.

After coaching the University of Idaho freshman basketball team while I completed my Master’s Degree, the University of Alaska at Fairbanks (Nanooks) hired me as its head basketball coach when I was just 23 years of age. Its previous coach had resigned at halftime of a game. Imagine me being the youngest Division I coach in America! My oldest player was a year older than I! That first year finished with a 13-3 record, the first winning season in the school’s history.  This did not count three wins and a loss against very good military teams.

This was a dream job.  One of the best men I have ever met, the late Joe Tremarello, was a head high school boys coach.  “Coach T” became my mentor.  He had played for the Nanooks.  He understood why every coach left discouraged. The administration made things very difficult to succeed and after a few years in the grind, I eventually resigned.  On my last day in Fairbanks, with all of my belongings shipped out of Alaska, I was offered an Associate Professor position and a 100% salary increase.  I just couldn’t stay.

Dealing with chest pains in Alaska, my wife Susie King Crowell, decided to see her hometown physician. Discovering no physical problem, the specialist inferred there was a spiritual problem instead. This led my wife to say to me a day later, “Fred, I want you to know I really love you, but today I made the most wonderful discovery. I invited Christ into my life to be my Savior and Lord.”

I did not get it! Did this mean my educated wife would become a religious fanatic? Was this good or bad news? Yet nothing would shake my love for Susie since the day I first saw her as a college freshman. Today, I can say Susie has not had those chest pains since that time. Then, may I tell you after much intellectual research and through a special friend in Alaska, I finally “got it!” It was not easy for me to say “Yes” to giving my life, my control, my freedom to Jesus Christ. After all, as a coach I understood authority. Still, this Person, Jesus Christ, died on the cross for me. No other person, even famous religious leader, had done that. Jesus was worthy! I prayed something like this: “I realize You are God and acknowledge Jesus as my Savior. I do want You to be the most real and practical experience of my life.”

After two years of university coaching, I was presented with the most unique opportunity. This was to be the head coach of the new Athletes in Action exhibition basketball team. Many of its players were from around the country. Halftime became a distinct presentation of Christ’s good news by the players. These were four years of tough exhibition games because all were on the road, some night after night, and against the better teams. One year we played 10 of the top 20 teams in the country. Our four-year record was 65-72. Still, every loss was painful. Here are some AIA athletic games and highlights:

This was personal and family counseling based on proven psychological and biblical principles.

After leaving the coaching field for family health reasons, I was asked to become a family and marriage counselor in a Spokane agency. This also gave me the opportunity to embark on a one-week summer residential basketball camp with 108 campers. Now, 49 years later, God has allowed us to impact about 10,000 campers each year in many states and five countries abroad. I sold the business, but not the basketball camp. This became my true love for my life’s work.

Samford University pursued me three times in eight years. The goal was to make Samford a national power.  The boosters were dedicated, wonderful men who raised hundreds of thousands of dollars. The new Arena Birmingham with 16,000 seats was our home and witnessed:

At one of my first visits with Willie Scoggins, one of the local high school coaching legends, he said, “I can tell you are a good man, but you will never recruit a Birmingham black athlete to come to Samford.” I asked why. He answered, “If I tell you why, you will be able to recruit one.”  My heart-breaking record was 28-76, although the last year was 10-15 after losing our leading scorer and rebounder with 9 games to play because of a separated shoulder. Many games were very close. Few teams worked as hard as we did with so little to show for it.  After four years, I confess I was beat down.  Even with every player returning and a lighter schedule, I was exhausted.  In January, with a winning record, I asked the booster club leader, the finest man I have ever known to do something for me. I asked him to not protect me any longer from the school president and his VP.  At season’s end, I was going to meet with the president and ask him to give his full support or fire me.  The board offered me a two-year extension.  I declined, and the president fired me one week later.  For better or worse, I challenged him, because I believed it was the right thing to do.

SPOKANE, my final years, 1980 to Present

How precious it has been now to claim campers as my championship trophies, especially those who choose to follow Christ. Although hard work, these 49 years of camp have been worth it because many have become Christ’s ambassadors. My daughter, Jennifer Crowell Ferch, is currently the COO of NBC Basketball Camps, www.nbccamps.com.

Rather than detailing the rich and successful history of NBC Camps, I can assure you there is strong evidence the Lord Jesus Christ governs in affairs for even the least and underserving of us.

It is my sincere hope that anyone who reads these words knows and understands my intent is to bring honor and glory to God.  He makes all things work together for good.  My office does not have a single NCAA or NAIA trophy.  Failure is not a bad thing.  Failure is inevitable. For this reason, I am quick to share my failures with the youth who come to NBC Camps, for it is failure that defines us.  Past failures have given me reason to trust the Lord with all my mind and heart.  Failure has prepared me to fight bone cancer.  Failure has been a stepping stone to all things working together for God’s good purpose.

I, Fred Crowell, am grateful for the opportunity to daily write blogs on Words of Hope at crowellu.com. Please join us!

To know more about my life, you can order my Meet My Head Coach book by e-mailing fred@nbccamps.com.  Nearly 50,000 books are in circulation.  The purpose of this book is to present a basketball coach’s mind in making the principles of the Bible knowable and understandable.

My prayer is that you allow the loving Ultimate Coach to weave your story for His glory and good. It will be priceless and a winner!