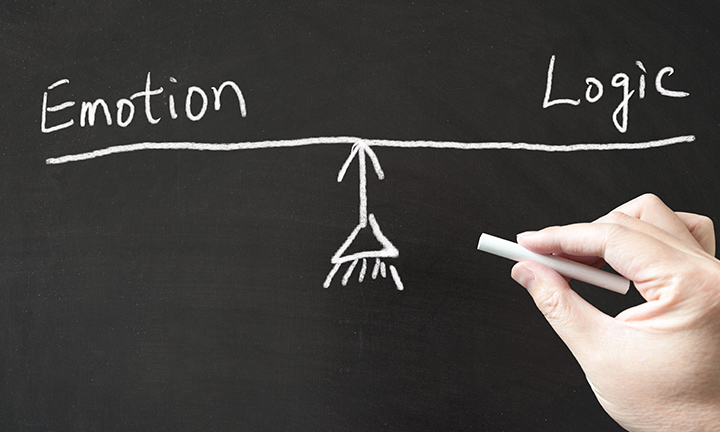 Most people make emotional decisions and try to justify them with logic.

The crucial decision-making question is, am I making an emotional or a logical decision?

The ideal is when emotions and logic match up, yet in reality, this is a rare phenomenon.

Brilliant men and women build sensational advertising campaigns with the sole purpose of selling products. Few sales pitches are based on logic as the vast majority of purchasing decisions are based on emotion.

Years ago Converse was the basketball shoe of choice. Marketers made a critically poor decision. They did not make Dr. J, the current world’s best basketball player, their main focus and they stuck to their underpowered 40 million dollar ad budget.

Nike attacked youth at the emotional level with a 240 million dollar ad budget. They got every kid in the basketball world to admire and love Michael Jordan. Nike did such an incredible sell job, inner-city kids have killed just to wear a pair of Air Jordans.

The issue with decision making is not a matter of it simply being a wise or foolish decision. In some situations, logic is the best way to decide the course of action; in other situations, a decision based on emotions is the best.

In 1966 the most profound decision of my life confronted me. Emotionally I resented Christianity. Logically it became intellectually clear to me Jesus Christ was exactly who He claimed to be.

The brilliant English professor, CS Lewis, said, “There are only three logical answers regarding the life of Jesus Christ.”

1. Jesus was a liar. If he lied, then He deceived millions of us.

2. Jesus was crazy, a lunatic who truly believed He was God. If crazy, he joins the crazy crowd of people who are still in their graves.

3. Jesus was who He said He was, The I Am. The Messiah, the Savior.

Professor Lewis proved logically Jesus could not be considered a great teacher like a Gandhi unless He was honest and truthful, but it is often our emotions that turn us away from logical conclusions.

EQ, emotional intelligence, is very important in decision making. EQ Is the skill set needed to know if a decision is based on logic or emotion.

The ideal is to make our logic and emotions congruent. When emotions may lead to immoral behavior, logic must win if we wish to avoid harm and pain. In the same manner, logic alone robs us of life’s true essence.

If life is to be fully lived, some decisions call for an emotional, not a logical decision.

The beauty of faith in Jesus Christ appeals both to the mind and heart. Rather than committing intellectual suicide, I logically said “Yes” to Jesus Christ, love of life and people and an emotional explosion of joy and gratitude followed.